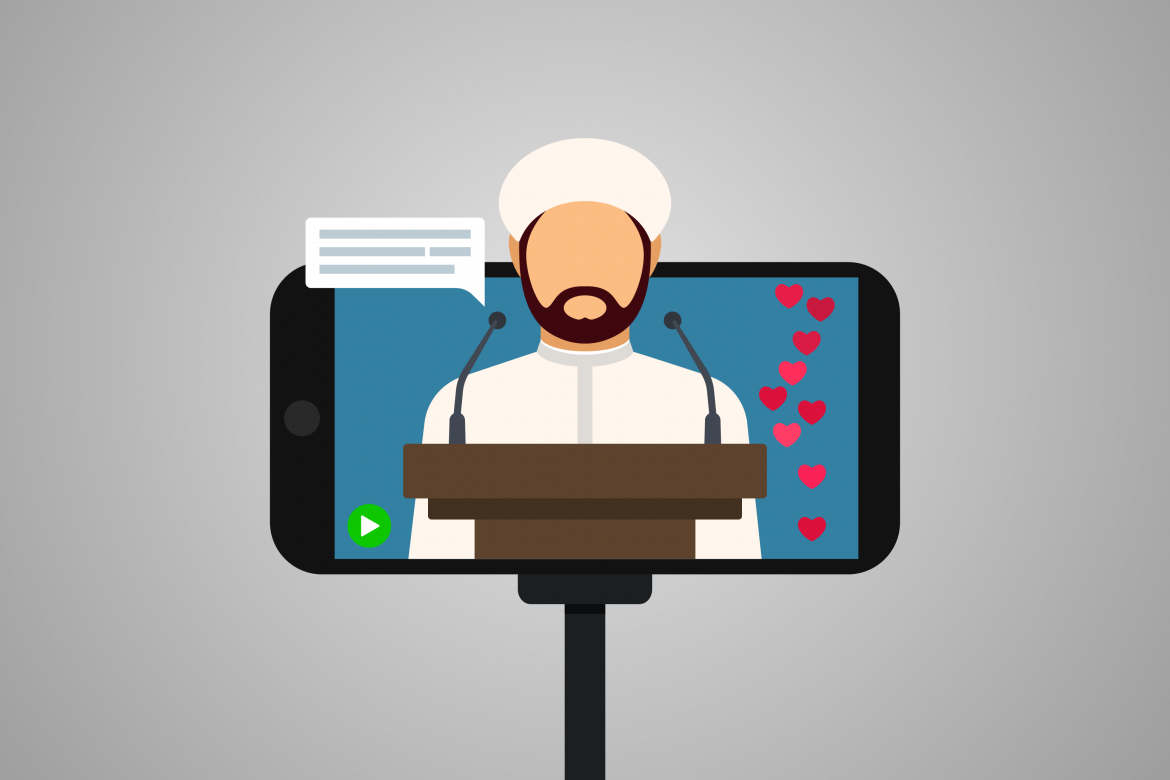 Advancement of technology can bring about new issues that cause us to revisit our understanding of religious rules and guidelines. The ability to transmit voice and video over long distances has led people to ask whether it is permissible or valid to participate in congregational prayer if a person were at a considerable distance from the imam [the prayer leader]. The same question has been asked regarding listening to a khutbah [sermon] through a radio, telephone, or computer broadcast and having it count as if the person was physically there.

History of the Issue

The question regarding praying a faraway distance from the congregation began with the introduction of microphones which could broadcast sound at a far distance. Some Muslims inquired whether they could remain in their homes or at their workplace and follow the imam without having to physically travel to join the lines of people behind him. With the introduction of radio broadcast, people living miles away could tune in to a masjid broadcasting the prayer and potentially follow in prayer while listening to the sound from the radio. This concept developed even further with the advent of video streaming, and it will certainly reach another level with virtual reality, where a person may feel like they are actually a part of a physical congregation. The question is whether this individual’s feeling of being part of the congregation may be considered, in the sight of Allah, as actually being part of that group. Is such a prayer valid, and if so, will it count as a group prayer rather than an individual one, and will it therefore take on the rulings and rewards associated with congregational prayer?

No recognized legal school nor scholar has ever allowed a person at a very far distance from the physical congregation to be considered as being part of that congregation. Scholars of Islamic Law [fuqahā’] have differed whether short distances due to potentially necessary barriers such as a building, a river, or a street would be a valid excuse for keeping a distance between the rows of worshippers. However, none of them has ever permitted or validated anyone to consider themselves as part of a group prayer when at a much further distance with no necessary obstructions. This is a matter of nearly complete consensus among scholars and schools, both past and present.[1]

The reason for invalidating such an action is because it contradicts the entire purpose of congregational prayer in the first place. Muslims physically gather in one place for prayer to strengthen emotional connections and interact with each other before and after prayer. This is simply not achievable without being physically present. The same wisdom applies to other physical acts of worship such as the Pilgrimage to Makkah [Ḥajj] which cannot be performed even if a virtual reality headset made a person feel as though they were walking around the Kaʿbah, and even if they were actually physically walking while going through the virtual experience. The lack of physical presence precludes such a virtual Ḥajj from being considered valid in the sight of Allah.

An individual’s desire to feel like they are part of the group is noble. Despite such a feeling, virtual participation does not actually make them part of that group, nor does the group that is praying together feel the same about that person since they are not present. Virtual prayers, according to both common sense and the latest research on the harmful effects of technology on socialization, would cause harm to the idea of community that Islam tries to foster through practices such as group prayer.

There are three major cases where people may want to join a group for prayer or khutbah from a distance, and in all cases, there are permissible alternatives to achieving some connection and ‘feeling’ of being part of the group.

[2] This means four people who are obligated to perform Jumuʿah such as adult males.