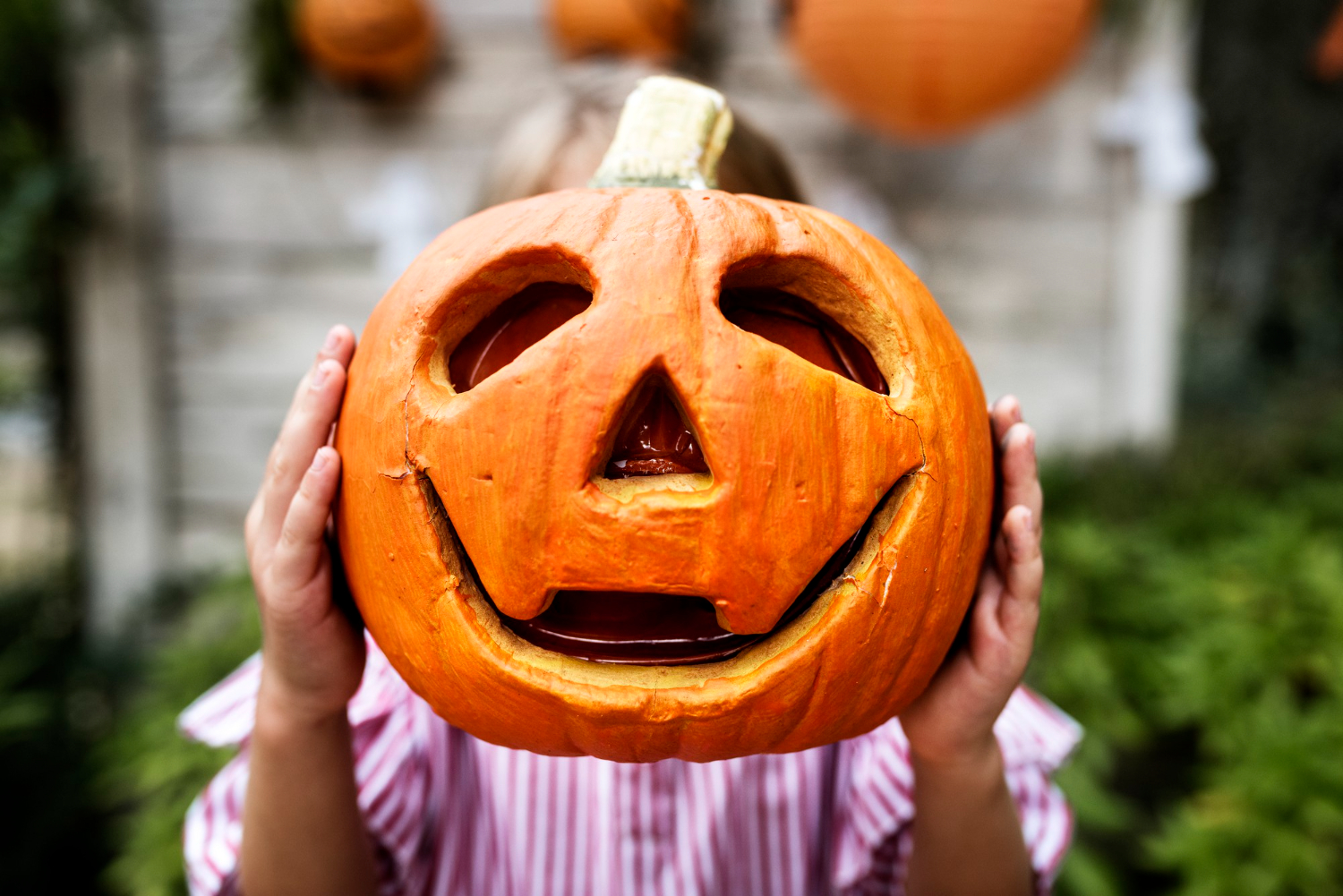 Introduction
Halloween is around the corner once again. It is the second largest holiday in the US after Christmas. Every year Muslims are compelled to make the difficult decision of whether to participate in the festivities of Halloween occurring around them or to simply ignore what people are doing with the hope that they will not be pressured by either their children or peers to conform. It’s not an easy situation to be in.

The modern ritual of Halloween contains many aspects of innocent fun and entertainment, especially for children: dressing up in costumes, getting candy from neighbors, and getting to carve pumpkins. Intrinsically, there is nothing wrong with any of these acts, which is why some Muslims participate in the rituals.

But there is another aspect of Halloween that revolves around witchcraft and black magic, evil and superstition. It is common to dress as witches, vampires, demons, zombies, and even Satan [or what people assume he looks like]. School classrooms and work offices are adorned with cobwebs and spiders. Some creative residents decorate their lawns with fake coffins and corpses or hang human skeletons from their doors.

Most people don’t stop to question why these things are associated with Halloween. But Muslims are not supposed to be like ‘most people’. Islam encourages them to think and question, reflect and criticize. Why are people doing that? Why do they dress up in costumes like this?
Where did the idea of going ‘trick or treat’ come from? Why are pumpkins mostly neglected throughout the year but become prevalent during Halloween season? Who came up with the game of ‘bobbing for apples’?

The Origins of Halloween
Researching the origins of Halloween reveals a lot of interesting history.[1] Halloween traces its history back to the ancient Celtic festival of Samhain [pronounced sow-in]. The Celts lived in and around modern day Ireland about 2000 years ago and celebrated their new year on November 1st. On the last day of the year [i.e. October 31st] they believed that dead spirits returned to the world, so their priests would light huge bonfires where people would make sacrifices to their gods.

Later, the Romans conquered the Celtic territory around 43 C.E. They were also pagans and had two festivals: one to commemorate the passing of the dead in late October and the other to honor Pomona, the Roman goddess of fruit. These two celebrations were eventually merged with the day of Samhain.

Centuries later, the Catholic Church established a day to honor all the Christian martyrs who had been killed and called it All Martyrs Day [also known as All Hallows Day]. This was originally celebrated in May but was eventually moved to November 1st to displace the pagan day of Samhain that was still celebrated in the region. Later, another day was added called All Souls Day to include all dead people. The night before All Hallows was called All Hallows Eve and the name evolved to become Halloween. The pagan Celtic ritual about dead spirits mixed with the Catholic one about honoring the dead.

In colonial America, observing Halloween was originally very limited because the Protestant Christians wanted nothing to do with pagan rituals. In the second half of the nineteenth century, more immigrants from Europe began to migrate to America, many of them coming from Ireland due to the potato famine of 1846. These white immigrants brought the celebration of Halloween with them and it began to spread throughout the country. By the 20th century, Halloween became a little more sanitized and the religious and superstitious aspects of the day were mostly gone. The symbols of ghosts and witchcraft remained but were not widely believed in due to a change in American attitudes. Nonetheless, many neopagans and Wiccans still believe in and celebrate Samhain. Today, Halloween has become commercialized and rakes in about $6 billion every year in the US alone. A fourth of all candy sold throughout the year is purchased for Halloween celebrations.

It is clear that Halloween is a day that has evolved over time, incorporating many different elements and cultures, mostly pagan, into it. The practice of dressing up in costumes originated from the fear of ghosts roaming the earth on Halloween. The Celts believed that if someone wore a scary mask or costume then the ghosts might not recognize them as humans.

To prevent ghosts from coming inside their homes, they use to leave food outside for roaming spirits to eat. The food also served as a ‘treat’ for the good ghosts from their deceased family members. The Catholic Church tried to displace this practice by encouraging people to give out ‘soul-cakes’ so people would pray for the dead instead. During the All Souls Day celebrations in England, poor people would go from house to house begging for food and families would give them some if they promised to pray for their dead ancestors. Over time, the twin practices of leaving treats for ghosts and begging for soul-cakes merged to become ‘trick-or-treating’. The ‘trick’ was added when people began threatening others that if they do not give some ‘treat’, a ‘trick’ will be played on them through some mischievous act.

The ‘jack-o-lantern’ originated from the practice of carving scary faces into turnips or pumpkins and leaving them outside the house to scare away ghosts. The game of ‘bobbing for apples’ came from the festival of the Roman deity Pomona, whose symbol is the apple. There were many other customs and superstitions associated with Halloween that have died out with the passage of time.

Symbolism and Secularism
Since Halloween has mostly become a secularized festival in the West, some Muslims argue that there is nothing wrong with adopting it. Knowing the history of Halloween and the origins of the symbols that are still associated with the day, we must be more cautious.
When the Christian ʿAdī ibn Ḥātim accepted Islam, he went to go visit the Prophet Muhammad with a golden cross around his neck. The Messenger of

Allah pointed to his necklace and told him, “ʿAdī, throw this idol away.” It is important to reflect on this statement. ʿAdī had already accepted Islam, which meant that he had already abandoned the idea that Jesus is divine. For him, the cross around his neck was only a symbol now. Maybe he liked the way it looked or had become accustomed to wearing it as a fashion piece. Prior to accepting Islam, that cross symbolized belief in Jesus being God and having died for the sins of all people. The moment ʿAdī accepted Islam, the cross that he was wearing immediately ceased to have this meaning, which is why he continued to wear it. Nevertheless, the Prophet made it clear to ʿAdī that this cross was still considered an idol because of what it symbolized, and must be discarded entirely.

Likewise, despite the secularization of many symbols that were once antithetical to Islam and its core message, the advice of the Prophet should continue to resonate with us. Muslims should be proud that they have the insight to trace rituals and customs back to their origins, and ascend beyond the blind conformity of imitating whatever cultural practices and rituals exist in their society. Halloween is a ritual that is yet to be purified of its pagan and satanic symbols and elements. Until this is done, Muslims should be weary.

There is nothing wrong with ordering a pumpkin spiced latte from the local café that only serves this drink around Halloween. Likewise, leaving out some candy to prevent your neighbor’s children from becoming disappointed might be a wise move, depending on where you live, but Muslims should generally avoid observing Halloween as a day of celebration. Instead, they must develop alternatives to where children have fun, get [healthy] treats, get to wear costumes, and carve out fruits. However, these alternatives need to be stripped of their pagan elements. The Muslim community will continue to wait in anticipation for those creative individuals to arrive who can introduce these alternatives. In the meantime, the corporations who profit from Halloween will continue to develop the holiday in whatever direction will gain them the most profit, without any concern for what symbols are promoted or what impact they have on people.

Muslims must remember that it is okay to be different. Halloween has evolved over time and theoretically has the potential to be stripped of its pagan symbols and made into a purely secular holiday. But until it is, we should discard the superstitious pagan symbols and replace them with something better.