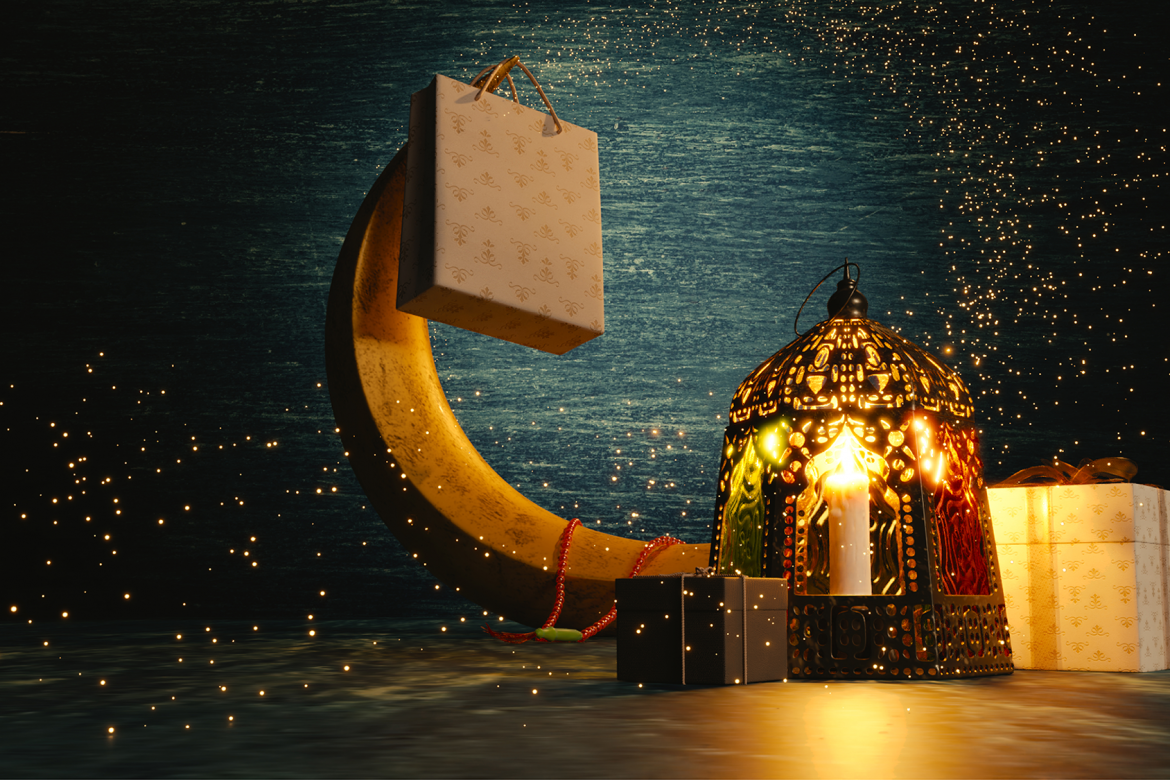 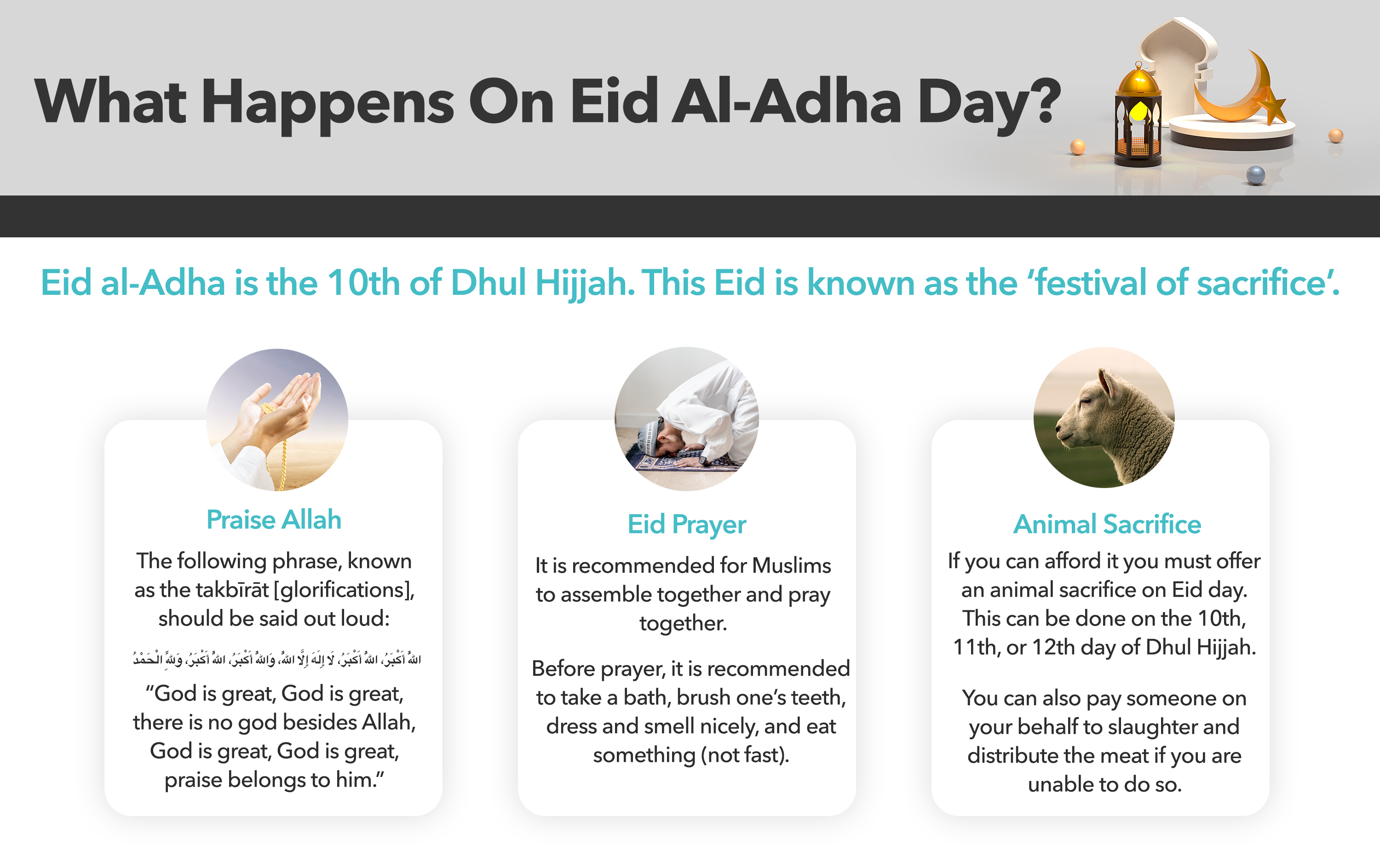 The 10th of Dhul Ḥijjah is known as Eid al-Aḍḥā [the festival of sacrifice]. It is a day of celebration for Muslims. The following three days of the 11th, 12th, and 13th are also an extension of the days of Eid.

This Eid is known as the ‘festival of sacrifice’ because it commemorates the incident where Prophet Ibrāhīm [Abraham] was ordered by God to sacrifice his only son, and they both willingly submitted. No human sacrifice actually occurred, because it was only a test of obedience and devotion. Ibrāhīm was told to sacrifice an animal instead as a symbol of his devotion [See Qur’an 37:100-110 and contrast with the Bible – Genesis 22:1-14]. It was a powerful reminder about the importance of sacrificing the things we love.

Praise Allah During these Days

There is a specific way to praise Allah during these days. The following phrase, known as the takbīrāt [glorifications], should be said out loud:

This formula should be said out loud by each Muslim right after each of the five daily prayers. This begins on the 9th of Dhul Ḥijjah [Monday] after Fajr prayer and continues until the 13th of Dhul Ḥijjah [Friday] after ʿAsr prayer, making it a total of 23 times.[2] The phrase must be said at least once but it is better if you do it more than that. It is common to say it three times.

On the morning of Eid al-Aḍḥā on the 10th, it is recommended to:

It is recommended for Muslims from different mosques to assemble together in a large area, if possible, and pray together. This Eid prayer is obligatory on adult men, but it is recommended for women and children to attend as well, even women who are not praying due to their period.

When a person leaves his house to attend the prayer, he should praise Allah on the way there by saying the takbīrāt out loud, as mentioned previously.

When arriving at the gathering place there are no extra prayers recommended nor is there a call to prayer [adhān] or commence [iqāmah]. A Muslim should continue praising Allah until the prayer is about to start.

The Eid prayer is identical to the Fajr prayer except that extra takbīrs [saying ‘allāhu akbar’] are added while standing. The Imām [prayer leader] begins the prayer as usual and recites the opening supplication inaudibly with his hands folded, and the people praying behind him do the same. Then he raises his hands like at the beginning of prayer, says ‘allāhu akbar’ and lowers his hands to his sides, and everyone follows suit. This is done a total of seven times in the first unit, so that there is one initial takbīr to start the prayer and seven additional ones after that. After the final takbīr, the hands are folded and the recitation of the Qur’an begins as usual. It is recommended to recite sūrah al-aʿlā in the first unit. When the imām stands for the second unit of prayer, there are five extra takbīrs added while raising the hands as was done in the first unit. Then the prayer continues as normal. It is recommended to recite sūrah al-ghāshiyah in the second unit.[5]

When the prayer is finished, the imām will stand and deliver two sermons like on Friday. It is important for people not to start talking or walk away during these lectures.

The timing for the Eid prayer begins fifteen minutes after sunrise and lasts until high noon. The mosque(s) organizing the prayer will set a specific time at which the Muslims will gather within this timeframe. If someone misses the prayer, it should not be made up.

After the prayer and sermons are complete, it is recommended for people to greet each other. There is no specific way of greeting, but many Muslims will shake hands, hug each other, say ‘Happy Eid’ [Eid Mubārak] or ‘May Allah accept from us and you’ [taqabbal allāhu minnā wa minkum].

If you can afford it you must offer an animal sacrifice on Eid day.[6] This can be done on the 10th, 11th, or 12th day of Dhul Ḥijjah. The animal to be slaughtered is a sheep or goat, or seven people can share in one camel or cow, since they are much larger animals.

You can give part of the animal in charity, feed part of it to friends and family, and keep some for yourself. You can also choose to give it all away or keep it all for yourself. If you find it difficult to physically purchase and slaughter an animal, you may pay someone on your behalf to perform the sacrifice and distribute the meat. Here are some organizations that do this and distribute the meat to the poor and needy in various parts of the world: ICNA Relief, Islamic Relief, Islamic Relief USA, Helping Hand, Life, or Baitulmaal.

Sacrificing an animal is not an act of cruelty. Animals have been created by Allah for the benefit of humans. They exist for us to use, but not abuse. There is no doubt that due to greed and consumption demands, many animals are being abused nowadays. Islam teaches the balance between benefitting from animals but not abusing or mistreating them.

[2] Imām Abū Ḥanīfah said that the takbīrāt are only on the 9th and 10th, so for eight prayers. His students disagreed with him. Some scholars said they should be done from the first of Dhul Ḥijjah, making thirteen days in all.

[5] Note that there is another way to perform the Eid prayer with three extra takbīrs in each unit. Consult an expert in Islamic Law for more details.

[6] This is the view of the Ḥanafī school. See Kitāb al-Ikhtiyār 5:20. Other scholars considered it highly recommended but not required, and some said one animal per family.