Precisely determining the beginning and end of Ramaḍān is very important because it indicates when to start and stop fasting. Therefore, it is an obligation on the Muslim community to ensure that this is determined accurately and publicized sufficiently.

How the Islamic Lunar Calendar Works

The Islamic lunar calendar consists of twelve months, with Ramadan being the ninth month. Each month lasts twenty-nine or thirty days.[1] Six months will be twenty-nine days and another six will be thirty days, thus making 354 days per lunar year.

The way this was calculated during the time of the Prophet Muhammad was that people would look at the sky at the beginning of every lunar month. If the new crescent was sighted, it would mean the next month has begun and the previous one has ended. The crescent is the sunlit portion of the moon as seen from Earth and varies according to the changing positions of the Sun, Moon, and Earth. The chart below shows what the moon looks like at the beginning [thin crescent], middle [full moon], and end [thin crescent] of the lunar month. 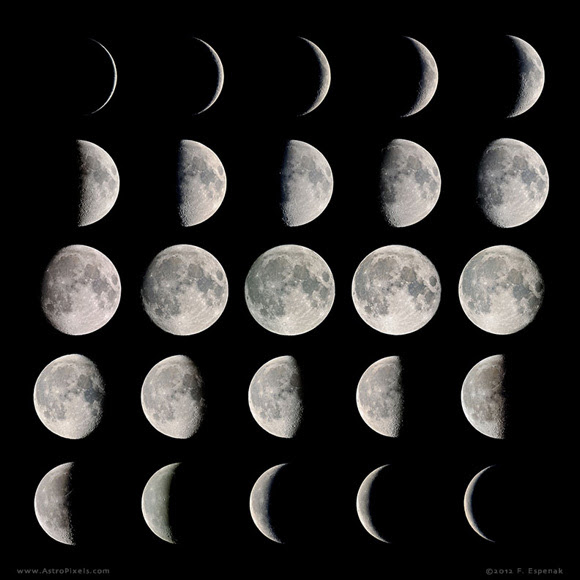 How Ramaḍān was Determined in the Prophet’s Lifetime

The Prophet instructed his Companions to follow this method when he said: “Start fasting when you see it [i.e. the crescent] and stop fasting [i.e. Ramaḍān is over] when you see it. If the sky is cloudy [and you can’t see the crescent on the 29th] then consider Shaʿbān as thirty days.”[2] It should be clear from this that months in the Islamic calendar were not known in advance whether they would consist of twenty-nine or thirty days.

The Desire for Predetermined Months

As communications in the Muslim community became more complex, there was a need to have predetermined months for scheduling purposes. It would be very inconvenient for people in the same region to be using different calendars. Since the visibility of the crescent was not predictable in advance, another method would have to be used.

One such method was the new moon conjunction, which, in astronomical terms, is when the moon is precisely between the Earth and Sun. During conjunction [which is also known as moon-birth] the moon is not visible from Earth because the sunlit portion of the moon is facing away from the Earth, as seen in the figure below. 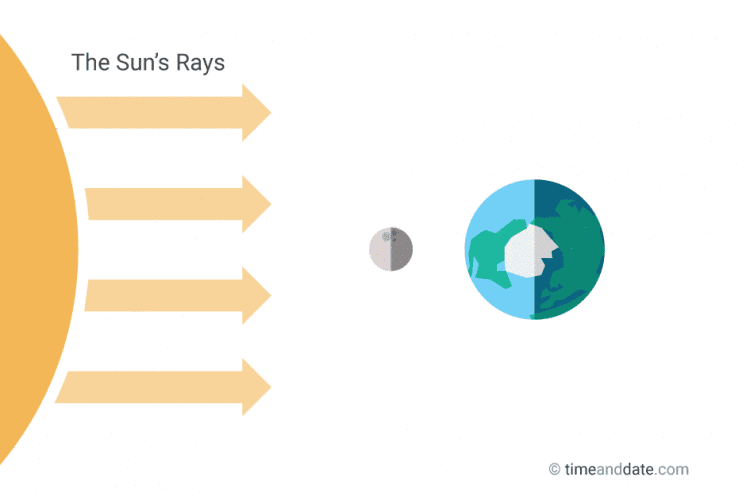 New moon conjunction is precisely predictable and can be calculated exactly. The crescent moon only becomes visible from Earth about a day or two after the new moon conjunction because even when the three celestial bodies are not in a straight line, the moon is still too close to the sun’s glare to be seen with the naked eye from Earth. It is important to understand that the moon is ‘born’ about one or two days before it is actually visible, so moon-birth and moon-visibility are two entirely different things.

Another method which was adopted in 1420 AH/1999 CE by the Ummul Qura calendar in Arabia was that if moonset occurs after sunset in Makkah on the 29th day of any month, then the month is over. This calculation is also precisely deterministic and took into consideration a time that is closer to the visibility of the moon than conjunction.[3] The Fiqh Council of North America [FCNA] and the European Council for Fatwa and Research [ECFR] have adopted a similar approach where the presence of the moon above the horizon at sunset anywhere on the globe is the criteria.[4] This is precisely determined when the elongation of the moon is at least eight degrees and it is at least five degrees above the horizon.

Which Calendar Should Determine Ramadan

The question arose among Muslim scholars: should Ramadan, and other religious days of fasting/celebration such as the 10th of Muharram [ʿĀshūrā’] and the 10th of Dhul Ḥijjah [Eid al-Aḍḥā], be determined through actual crescent sightings or a predetermined calendar?

Several scholars argued that dates which have a religious significance should be determined through actual crescent sightings, the way the Prophet Muhammad did, and the calculated calendar can be used for civil purposes. Other scholars posited that a calculated calendar should be used for both civil and religious dates, the same way that it is used by most urban Muslims throughout the world for their prayer times, without having to actually check the light in the horizon for Fajr or the shadow-length for ʿAsr.

What Variables Result in Differing Opinions on the Issue

In 1939, Egypt announced Eid al-Aḍḥā to be on Monday, Saudi Arabia announced it for Tuesday, and India determined it to be on Wednesday. This is common almost every year. How could there be three different dates?

There are several variables which result in different conclusions about when the lunar month should begin and end. Understanding these differences will help a person understand why the issue is not as simplistic as it seems.

These are some of the variables encountered when attempting to determine the beginning of a month in the lunar calendar and should help explain why people arrive at different conclusions.

How to Achieve Unity in Ramaḍān

It may sound ideal to try to unite the entire world upon one date, but given the host of variables involved in the process, it is unlikely to happen anytime soon. Since some aspects of determining the new month were left vague by the Prophet, people will naturally differ in trying to interpret what Allah and His Messenger really intended.

The issue boils down to respect for authority. In the absence of any central authority within a locality, whether it be a city, state, or country, any Muslim is free to adopt whatever criteria they want. Muslims, in any locality, must have leaders who are willing to come together and agree on one criteria to adopt, even if they do not agree it is the ideal or most correct method. This is the first step. The next step would be to ensure that the Muslims respect the decision of those leaders and agree to follow it, even if they are not convinced it is the most accurate method.
Until this occurs, Muslims may find peace in knowing that no calendar in the world is absolute[5], that the Prophet took into consideration foggy evenings when the crescent is not visible, and that God will judge us according to our intentions and efforts.