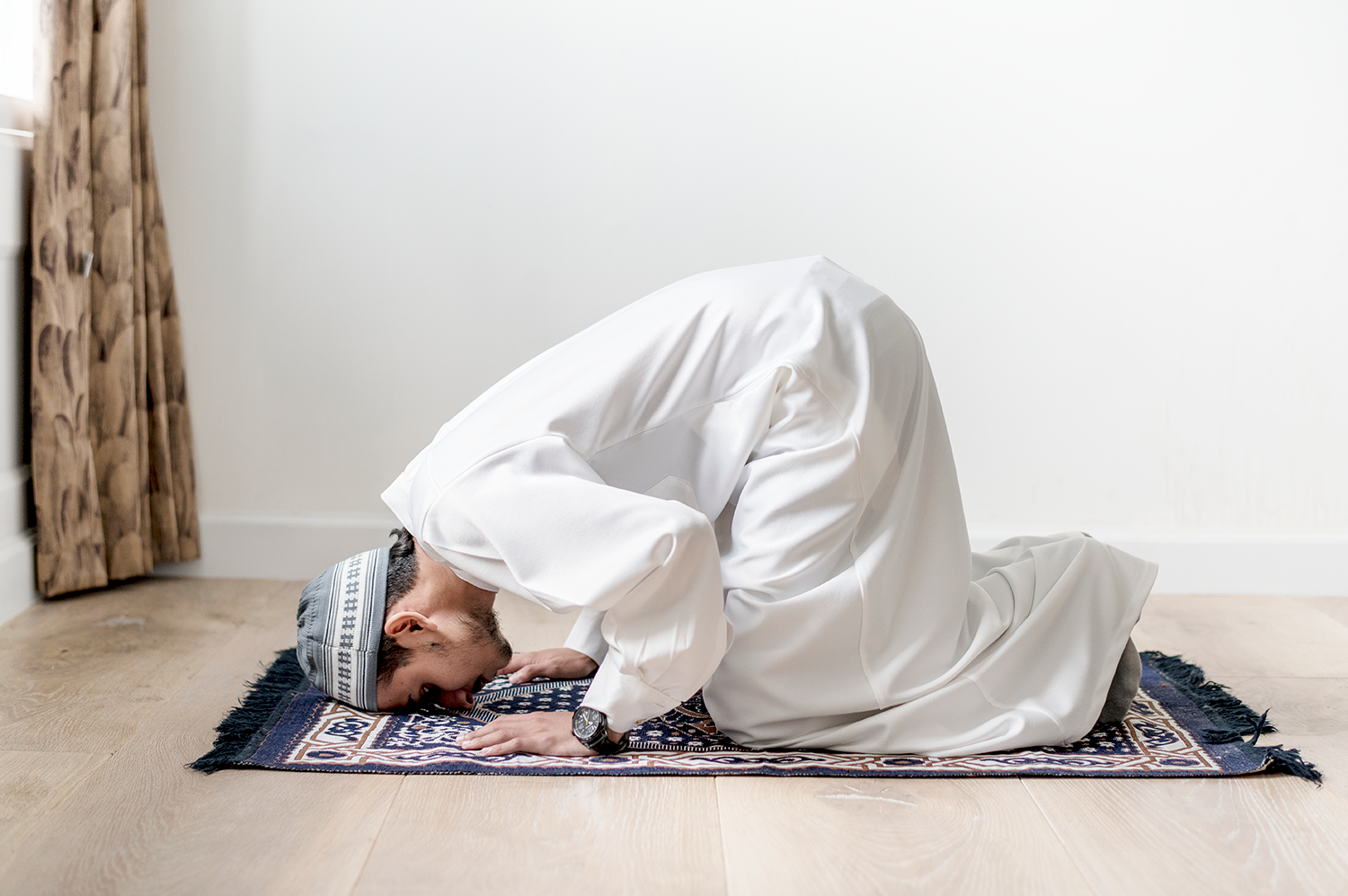 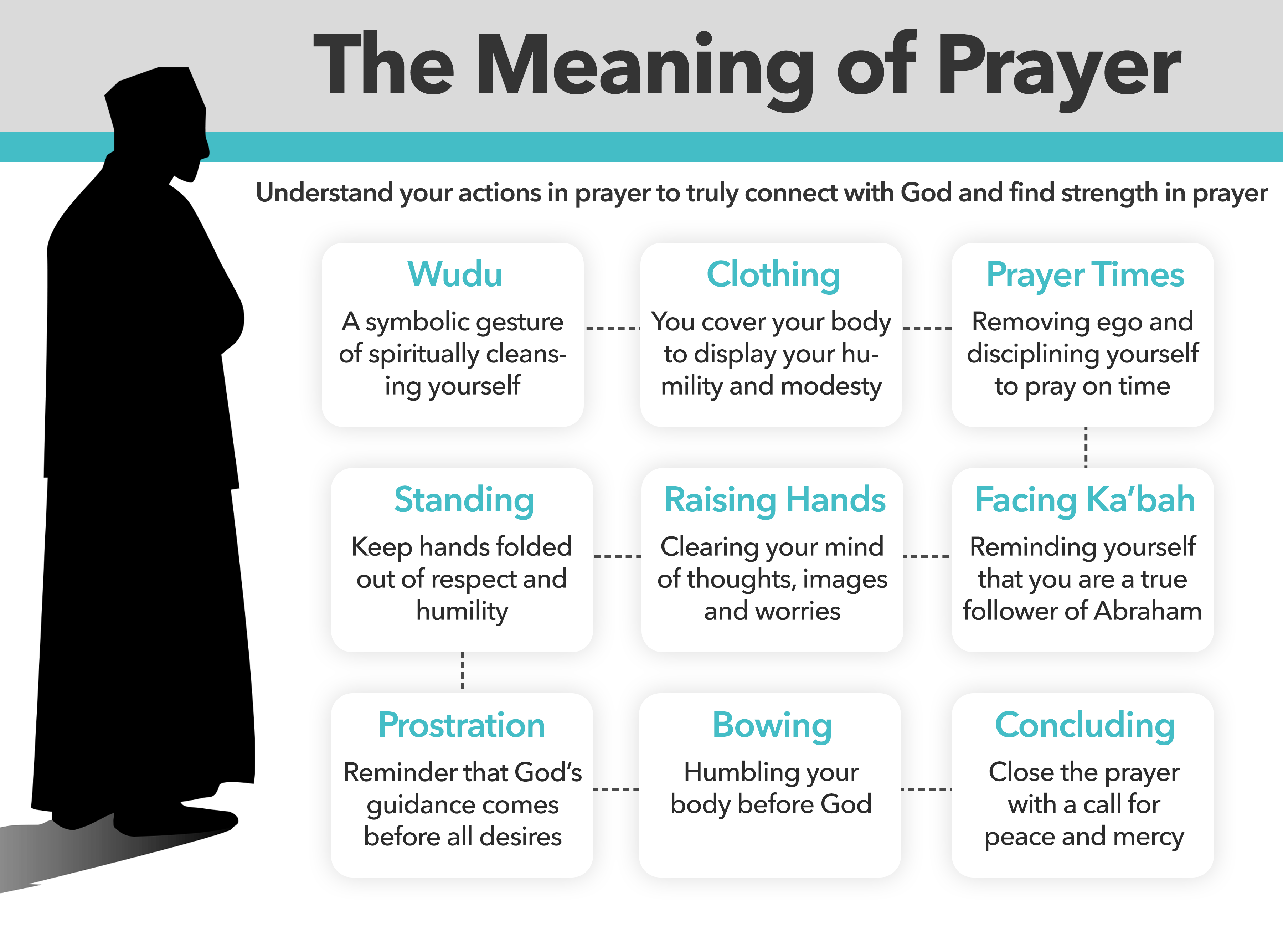 Muslims pray five times a day. In Arabic. It is important to know the meaning behind each action and statement in the prayer so that it goes beyond being a formulaic ritual and becomes a way to really connect with God. The more you learn to focus and understand the prayer, the easier it will be to get closer to God and restrain yourself from Islamically-immoral behavior. The prayer will then be able to function as an infinite source of strength in all aspects of your life and eventually become something you enjoy rather than merely fulfill.

The following is taken from chapter eight of my book, “How to Pray: A Step-by-Step Guide to Prayer in Islam”:

You perform wudū’ as a symbolic gesture of spiritually cleansing yourself before you stand in front of God.

You clean your clothes, body, and place of prayer which represents the bare minimum etiquette that a Muslim should display before meeting God.

You cover your body to display your humility and modesty in front of God. Even though He created you and is aware of everything, you show the same respect that you would to God as you would show when meeting anyone else.

You pray during certain times of the day to keep a program of discipline for yourself. Your ego would distract you away from remembering God and tell you: “don’t worry, pray later.” However, with a strict, yet flexible, schedule you learn to make time for God always.

You face Makkah because it contains the Ka’bah, the first building dedicated to the worship of the one true God. This building was made by Prophet Ibrāhīm [Abraham] and his son Ismā’īl [Ishmael]. By facing it, you remind yourself, and everyone else, that you are among the true followers of Abraham.

Before you begin the prayer, you stand with full attention before God. Your head is slightly lowered out of respect.

Keeping your hands folded in front of anyone is a sign of respect and humility in front of that person. God is most deserving that you humble yourself in front of Him.

You say “I seek protection with God from the cursed Satan” before beginning the recitation of the Qur’ān. It purifies your ego and reminds you that you need God’s help so that you aren’t distracted during your prayer. It also is a sign of humility since you admit you don’t have full control over your own thoughts, so you ask God to help you avoid the whispers of Satan, both in your prayer and in your life.

You say “In the name of God, the Most Kind and Merciful” to purify your intention and make your recitation of the Qur’an purely for the sake of God, so that you can receive His kindness and mercy.

You recite the Fātiḥah, the first and most comprehensive chapter of the Qur’an. It begins by praising God, who is the Lord and Master of everything in existence. Despite that, He is kind and merciful. He will be in control on the Day of Judgment when all people will be held accountable as to how they lived their lives. Then you begin speaking directly to God, declaring that you would never worship anyone but Him and that you are in need of His help. Next, comes the most important part: the invocation. You ask God to guide you along the correct path that leads to Paradise, the way that he led you to Islam. Finding the right path is not enough, you must make sure to stay on the path and you must move forward, rather than backward, so you ask God for help. The path is further defined: that you want to follow the way of life that righteous people followed, not the way of life followed by people who deliberately rejected the truth or were misled along a wrong path.

You say “āmīn” which literally means “answer”. You ask God to answer your prayer since you just asked Him to guide you on the straight path. It is an additional request and an emphasis that you really need God’s guidance. It is also a source of optimism since you know that God answers prayers when they are done with sincerity.

You recite some verses of the Qur’an to reflect on the meaning and practice your memorization. One of the shortest, yet deepest chapters of the Qur’an is al-Ikhlās. In it, Prophet Muhammad was instructed by God to declare that God is one and eternal. He neither has children or parents. Nothing in this world can compare to God in any way because He is transcendent above all His creation.

You humble your body before God by lowering it in a bowing position. This reminds you of your place in front of Him.

You say “Glory be to my Lord, the great” manifesting your humility in front of God. The words are perfectly in line with the posture of bowing and you say ‘my Lord’ to make it more intimate and respectful. God may be the Lord of everyone but at this time you are only concerned with your relationship to Him.

You stand up to take a break from bowing.

You say “God has heard the one who praised Him.” You remind yourself that your prayer is not in vain and that God hears the prayer of everyone who sincerely praises Him.

You say “Our Lord, you are deserving of praise” Thereafter, you praise Him one more time to express your certainty about what you just said and prepare for the most important part of the prayer.

This position is the most humbling experience where you put your face, which represents your honor, on the floor in front of God. It reminds you that God’s guidance must remain above man’s own inclinations and desires.

You say “Glory be to my Lord, the highest” manifesting your humility once again. However, this time, you contrast your lowly, humble position with the lofty, highness of God.

You sit up to take a break from prostrating.

You prostrate once again, revealing the importance of this humble position in front of God.

After completing all the units of prayer, you sit in a comfortable and relaxing position after having stood for a while.

You say “Greetings, prayers, and all pure things ultimately belong to God. May the peace of God be with you, Prophet, as well as God’s mercy and blessings. May the peace of God be with us and with all of God’s righteous servants.” All of the respectful greetings and praise that people give to idols, kings, and rulers actually belong to God, because He is deserving of them. The same is the case with all forms of prayer as well as any other pure action, since God is pure and only accepts that which is pure. You send peace on the Prophet because he is your guide chosen by God. You then send peace on yourself and on all other righteous people, praying that you become one of the righteous whom God is pleased with.

You say “I declare that no one deserves to be worshipped except God and I declare that Muhammad is His servant and messenger.” This declaration identifies you as a Muslim and you reaffirm it during every prayer. You reaffirm that nothing else in life is worth obeying except for God and that the only way to worship and obey Him properly is through the Messenger of God. You raise your right index finger while saying this to signify that God is one.

You say “May the peace and mercy of God be with you.” It is befitting to close the prayer with a call for peace and mercy because that is what Islam tries to accomplish. It brings peace in the life of the Muslim as well as in the society, so you turn your head in both directions while saying it so that it is directed towards everyone around you, even if no one is there.

The bare minimum purpose of prayer is to take you away from your daily activities, for a few moments, to remember God. If you can accomplish at least this, the prayer will have some benefit. However, the ultimate goal should be to worship God with such concentration that it is as if you are standing directly in front of Him. Even though you cannot see God, He can see you. This may take a lifetime to achieve, but it is a goal that every Muslim should have in their life.